(Update on Dec 30, 2021: I created a python library luigiflow for the workflow management I describe here. Any feedback is appreciated!)

I’m a research engineer of machine learning (ML), exploring ML models for various tasks. Like many ML researchers, I spend a lot of time doing experiments. So improving the efficiency of experiment workflows would yield considerable benefits.

MLOps is one of the hottest topics in the field, but I’ve found that the primary goal of MLOps isn’t for me. MLOps aims to improve ML models continuously, whereas I’m responsible for developing new ML models for new tasks. I believe this isn’t the case just for me. I’ve met many people who have the same trouble, from academia to industry. So I started to think about what I don’t need in addition to what I need for managing ML experiments. 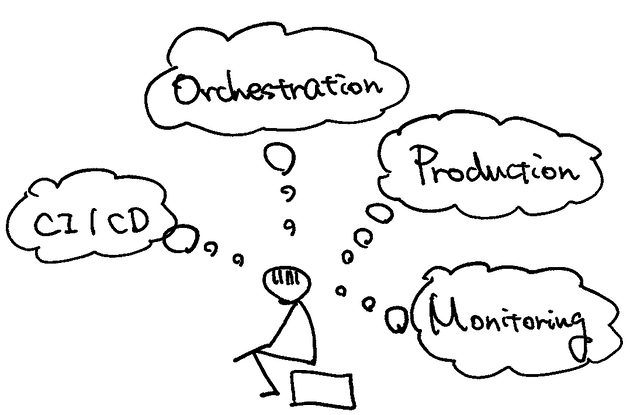 MLOps requires you to think about a lot of stuff!

Considering my typical work scenario, I found two components that most of the practices consider but I don’t need.

On the other hand, here are what I actually need to manage my experiments.

This article explains why I (don’t) need the first two components. Then I introduce a simple yet effective workflow that I employ in my daily jobs.

I don’t need to consider production (at the beginning)

I wouldn’t say that considering production doesn’t matter. It’s important to monitor performances or to have continuous deployment pipelines to improve product quality. But do you have to think about production? If your goal is to publish a paper, you may not need to do so. Even if you’re working for production, you may not need to think about it when exploring algorithms to solve new tasks. I’d like to have another workflow for managing ML experiments ,independent of the complex flow of MLOps. 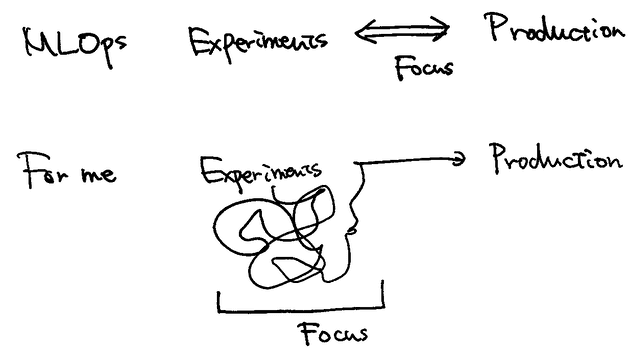 I'd like to focus on experiments, which are complex themselves!

While developing an experimental environment is fun, we have to remember that it’s not the main goal for most of us. My main responsibility is to develop and evaluate ML models to improve the task. I believe many people have been assigned the same responsibility. If so, taking too much time to improve experimental efficiency wouldn’t be a good idea. It’s totally fine not to use “modern” and “state-of-the-art” frameworks if they’re costly. 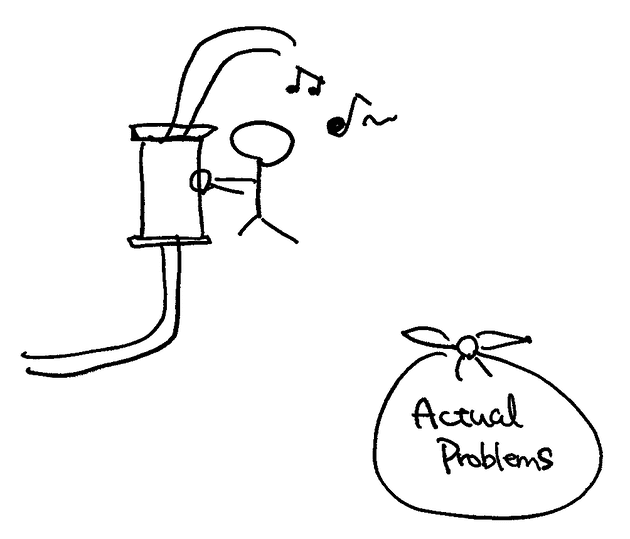 Building pipelines is fun, but we tend to ignore actual problems...

I need to control task dependencies

I usually break a machine learning problem down into small tasks. This approach helps me add new experiments quickly. Take an example of training a model of news article classification. I would deconstruct it into the following tasks. There are some dependencies between tasks.

Why isolate fetching IDs from fetching article bodies?   This is to enhance the modularity of tasks. If you want to add article titles to the article features, for example, you can just add another task to fetch article titles instead of changing existing task behaviors. There is a trade-off between the modularity and the complexity of dependencies. I prioritize enhancing modularity because workflow engines support dealing with complex dependencies.

I need to manage parameters and outputs of each task

Comparison is essential when developing machine learning algorithms. I often compare different parameters by looking at outputs, so I need functions to support that. 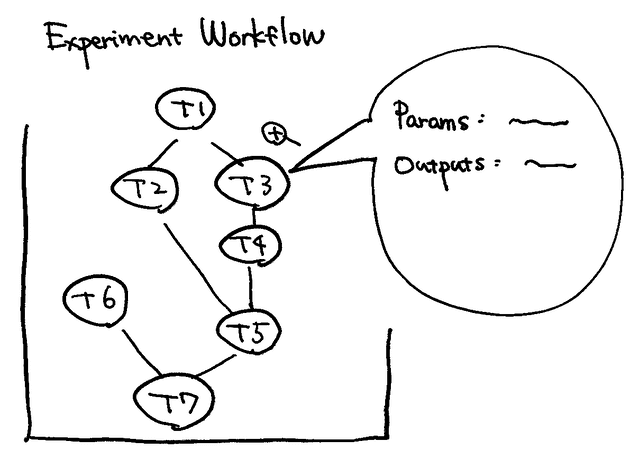 Graph of tasks and their dependencies. Each task has parameters and outputs.

My workflow: Luigi and MLflow tracking

Roles of Luigi and MLflow.

Each task has its own MLflow experiment. A Luigi task stores parameters, outputs (artifacts), and metrics to its corresponding MLflow experiment. The workflow above has some tasks that don’t look like “experiments”, but it’s totally fine to manage them as experiments in MLflow. (In fact, MLflow is helpful just as storage of parameters and artifacts.)

Luigi is a workflow manager for Python. It helps us run tasks that have complex dependencies among them. Unlike language-agnostic workflow managers, you can write a task easily by implementing a subclass of luigi.Task. A task class implements three methods: requires(), outputs(), and run(), which specifies task dependencies, output path(s), and the main procedure, respectively.

A task can have parameters as instances objects, as follows.

And you can specify parameters at runtime by having luigi.cfg like the following. (See the official document for more detailed information.)

You can run a task by calling luigi.build().

MLflow is a platform to help us manage ML lifecycles. I use MLflow Tracking, which is a component of MLflow for managing ML experiments. (Hereafter, I call MLflow Tracking just MLflow.) 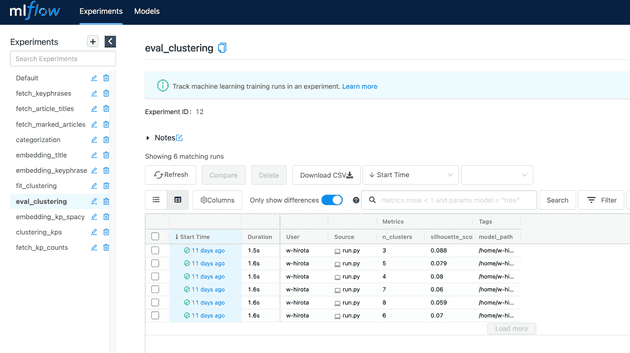 This is the UI of MLflow tracking for one of my projects. 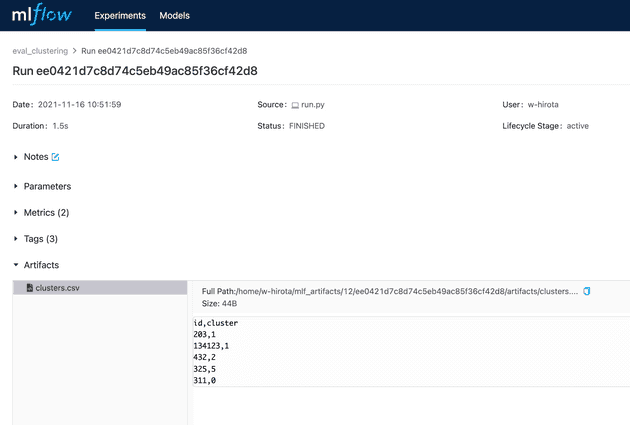 For each run, you can preview outputs.

MLflow offers simple APIs. You can create a run in an experiment and make logs as follows.

For each Luigi Task, such as fetching IDs or clustering, I prepare an experiment in MLflow. To make a template for Luigi tasks to integrate with MLflow, I made a subclass of luigi.Task. I customized the following methods in luigi.Task. 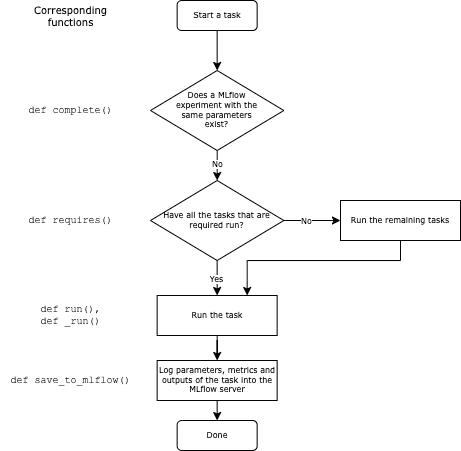 And these are what each subclass of MlflowTask has to override:

For example, FetchArticleTitles (Task 2) can be implemented as follows:

This article introduces my two don’ts and dos for ML experiments and my experiment pipeline. I don’t assume that this pipeline works for everyone. Some people may need additional features that Luigi and MLflow don’t support. But I believe that thinking about the “don’t need”s is becoming more important nowadays.

I’d like to thank Sajjadur Rahman and Sara Evensen for giving great feedback!